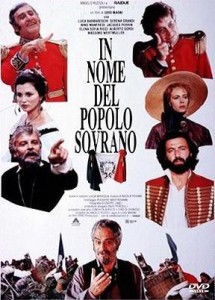 Third work by Luigi Magni devoted to the relationships between the people, the Pope’s power and the Roman aristocracy. The film is a historic fresco focusing on the end of the Roman Republic (1848-1849) and the resulting climate of instability and excitement. The protagonists are a group of heroic patriots: a Barnabite monk, against the temporal power of the Pope, a nobleman from Milan and a man of the people, who try to reach Venice together with Garibaldi’s army.

LOCATION Some sequences of the film were shot in Mesola and in Comacchio.
The inn where Cristina Arquati (Elena Sofia Ricci), who has come north to look for her beloved Giovanni Livraghi (Luca Barbareschi), stays and is told by a regular customer that Giovanni was arrested by the Austrians and taken to Bologna, is today the restaurant “Al Castello” in Mesola (Ferrara), namely in Piazza Umberto I.
The bridge of Comacchio in front of which the Austrians arrest the two patriots Giovanni Livraghi (Luca Barbareschi) and Ugo Bassi (Jacques Perrin) is the iconic Bridge of Trepponti in Comacchio.