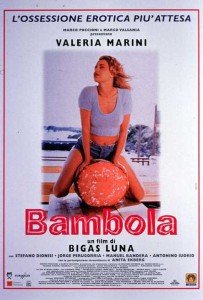 The plot unfolds in the Comacchio valleys and begins in a small restaurant for truck drivers managed by a family made of the young and sensual Mina, called by everybody Bambola, her mother and brother. After their mother’s death, the two siblings turn the restaurant in a pizza place thanks to the help of Ugo, a thirty-year-old bank employee in love with Bambola. Blind with jealousy for the woman, Ugo starts a fight and is killed by Settimio who is then imprisoned. Bambola and Flavio visit Settimio in prison and in the parlour get to know Furio, imprisoned for rape, who falls madly in love with the woman and takes her in a spiral of passion, violence and abuse.

LOCATION The film was shot between Comacchio, the Valli di Comacchio (Strada Foce) and Lido di Volano.
The outside of the prison where Settimio and Furio are, is in Via della Peschiera in Comacchio and is connected to the backyard of Palazzo Bellini (the courtyard and indoor sequences where shot instead at Regina Coeli in Roma): the shot is taken from the Trepponti.