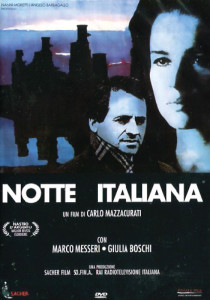 First work making up the so-called “Trilogy of the Po” and cinematographic debut of Carlo Mazzacurati, the protagonist is barrister Otello Morsiani (Michele Messeri), investigating on a series of obscure facts occurred in the Po delta area including real estate specualtions, illegal extractions and a mysterous murder. These facts involve a local businessman Tornova (Mario Adorf), owner of a chicken farm and also the local inhabitants, mutually bound by a mixture of connivence and silence. Encouraged by his honesty and his love for a girl who settled there to escape her past as an armed fight militant, the barrister will risk his life and sacrifice his friendships in order to find out the truth.

LOCATION The film was shot mostly in the southern Polesine area.
The facility where Tornov’s chicken farm is located and that plays a crucial role in the plot currently hosts the Museo della Bonifica di Ca’ Vendramin (along via Veneto in Porto Tolle).
The villa from which Morsiani and the two land surveyors are attacked with some rifle shots while they are surveying the area (at the same time the female protagonist is bathing with her son in a fountain that does not exist any more) is Ca’ Pisani, a hamlet close to Porto Viro.
The inn where Morsiani stays is located in Via Sant’Ilario d’Enza in Porto Tolle.