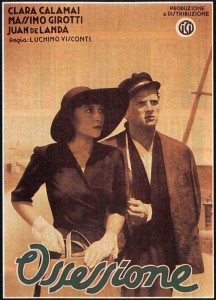 Considered as the founding film of Italian Neorealism, Ossessione is the film used by Luchino Visconti to depict the lumpenproletariat of the Po valley without any fear of unveiling its saddest and pettiest aspects, challenging the strict moral attitude of that time. Gino (Massimo Girotti), a young broke and aimless vagabond ends up in the country shop owned by a man called “Bragana” (Juan De Landa), an old man married to a younger and unsatisfied woman, Giovanna (Clara Calamai). Gino finds hospitality and a job in the local tavern and establishes a secret affair with the landlady. The latter is tired of not being able to live with the man she loves, therefore she asks Gino to kill her husband by faking a car accident. The guilt for the murder and the fear of being discovered will not leave them until the tragic end.

LOCATION The story takes place in the lower Po valley close to Ferrara, along the Po banks, where most of the shooting was made.
The tavern owned by Bragana was located on the Po banks not far from the area of Polesella.

This is the second film of the Anti-fascist fight of Roberto Rossellini and it is considered as a masterpiece of the Italian neorealist wave.
It was mostly shot with non-professionalactors and it is made of six episodes about the ad ance of the allied forces in Italy. From the anglo-american landings in Sicily during the night of July 10th 1943 to the partigiani resistance fights in the North of Italy, during the winter of ’44, few months before the end of the war. The last episode, Porto Tolle, is set in the Po mouth area where some former american prisoners join the hiding partisans and together fight against the Germans who are sailing up the river on ships heavily eauipped with weapons. A bloody clash took place in the marshes of Polesine where the nazi-fascist soldiers also made violent retaliations against partisans and also harmless civilians. This episode opens with the dragic image of the dead body of a partisan carried away by the river stream. Rossellini had witnessed several times the same tragic scene with his own eyes while travelling along the Po river: “I had in my mind those dead bodies floating slowly in the water, holding a writte sign “Partisan”. The river has carried around those corpsed for months. In one day it was easy to spot many of them”.

LOCATION The film was shot along the river banks in the areas of Porto Tolle and of the Sacca di Scardovari. 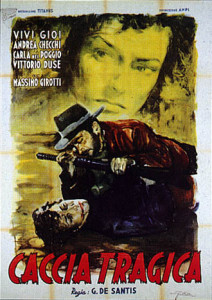 Cinematographic debut of Giuseppe De Santis, this film, whose script was written by the director together with Michelangelo Antonioni, Umberto Barbaro and Cesare Zavattini -is a crime story unfolding around several contemporary popular stories and slightly evoking the style of some American movies.
The protagonists are the farmers of a farmers’ cooperative oppressed by authoritatian bosses and also some detention camp survivors who strive to get back into society after the devastating events of the war. Michele (Massimo Girotti) and Giovanna (Carla Del Poggio), a newly wed couple, is travelling on a truck with the accountant of a farmers’ cooperative who has to bring four millions to the cooperative’s headquarters, when they are suddenly attacked by two criminals. The driver and the accountant are immediately killed, the money is stolen and Giovanna is taken as a hostage. A manhunt starts involvi g both the farmers and the local police, Carabinieri.

LOCATION The film was shot in the surroundings of Ravenna – Marina di Ravenna and Marina Romea (viale Italia and Viale dei Pioppi) – and in the Valli di Comacchio. 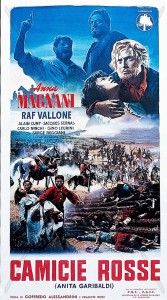 The film starts and ends in the countryside around Ravenna where will end Anita’s Garibaldi (Anna Magnani) agony. The escape of Garibaldi (Raf Vallone) in July 1849 after the fall of the Roman Republic is told through a long flashback. He will try to escape with an army of a thiusand volunteers chased by the Bourbon, French, Austtian and pontifical amries. The Austrian army will disarm them and make them surrender in San Marino and then it will brutally shoot the diehard Garibaldian followers in the Ravenna marshes while Garibaldi himself, devastated by the death of his beloved partner, avoids miracolously being arrested and goes into exile.

LOCATION Several sequences of the film were shot between the valleys of Comacchio, Porto Garibaldi and the Ravenna countryside. 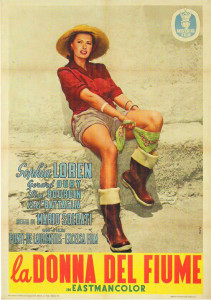 This film, that finally consolidated Sofia Loren, for the first time in a dramatic role, is a melodrama turning on Nives, the female character that only seems to match the stereotypical women of that time but who in fact was very resolute and brave. The project involved Moravia and Flaiano, both story authors, Bassani, Franchina and Pasolini, scriptwriters, and Florestano Vancini, as Director’s assistant, (whose documentary films “Uomini della palude” and “Tre canne un soldo” inspired the film setting).
Nives (Sofia Loren) works with other women on eel marinade in the Comacchio valleys. During a party a fight starts: Gino (Rik Battaglia), a smuggler, takes advantage of the situation and succeeds in dragging the scared woman away and finally seduces her after months of courtship.
Nives becomes Gino’s lover but he does not want a stable relationship and even if she is pregnant he runs away. Nives, takes her revenge and makes him be arrested. After two years Nives has a son and does her best to make him grow safe and sound, away from gossip. That is why she left Comacchio and cuts canes on in the Po delta. In the meantime Gino escapes from prison and wants to take his revenge on the woman. He finds her watching after her dead son and, moved, he gives himself up to the Police and asks Nives to wait for him.

LOCATION The film was entirely shot in the Valli di Comacchio and in the area of Lido di Volano.
Nives works at the premises of the former Valli di Comacchio factory – currently Manifattura dei Marinati – The sequences shot in the area where the eels were marinated are very famous. The party sequence was shot in open area close to the beach of Lido di Volano.
Nives’ house still exists today and is visible in Taglio della Falce. 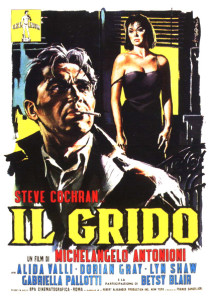 In this film Antonioni depicts the inability of men to connect with the reality surrounding them. The director draws on a demising love story to depict a neorealist-like itinerant drama where the drifting protagonist mirrors an inner incurable malaise inevitably leading to a tragic epilogue. In a desolated Po plain hinterland made of gloomy lands and foggy landscapes, unravels the inner ordeal of Aldo (Steve Cochran), former blue-collar worker of a sugar refinery, wandering aimless after that his partner, Irma (Alida Valli), left him for another man; with the sole company of his little daughter (Mirna Girardi) he will first visit an old lover (Betsy Blair) and then will look for comfort in a resolute service station female worker (Dorian Gray) and then in a lonely and desperate call girl (Lyn Shaw), however, nobody seems able to ease his pain.

LOCATION Originally the film had to be shot between Pontelagoscuro, Occhiobello, Ca’ Venier and Punta Maistra but the Po route in 1956 led to some script cuttings and an overall change of locations. The fictionary village of Goriano and the houses of Aldo and Irma were set in four different locations: Francolino, for the sequences shot in the village streets, the outskirts of Ravenna, in the Pontelagoscuro area, the Po bank near Ravalle, where is located Irma’s house, Stienta, for the village seen from a distance.
Elvia’ house was located along the bank between Pontelagoscuro and Occhiobello.
Virginia’s service station was located in the Cervia saltworks area, near Tantlon (along the Strada Statale Salara 254). 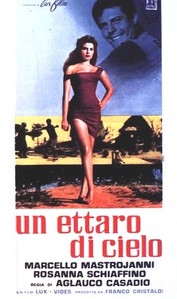 This film was the directing debut of Casadio, but most of all of the author and scriptwriter Tonino Guerra, who was invited by the director to work with Elio Petri and Ennio Flaiano, after reading some of his poems written in the dialect of Romagna.
The film, a poetic and picaresque fairy tale, is set in a small village in the delta area, isolated between marshes and swamps, where every year takes place a trade show takes regularly joined by Severino (Marcello Mastroianni), a creative street vendor. During the trade show Severino succeeds in selling to a group of retired friends a hectare of sky where they will be able to rest in peace after death. The old men swallow the bait and decide to commit suicide – but fail – in order to reach the piece of sky they just bought.

LOCATION The film was entirely shot between Lido di Volano, Codigoro and the Oasi di Cannevié 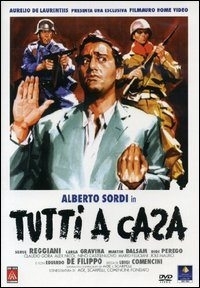 Veneto coasts, September 8th 1943. Marshal Pietro Badoglio asked the Anglo-American powers for the Armistice, after this announcement enthusiasm is quickly aroused among the soldiers. However, things appear clearly much more difficult: the Germans, once allied, have now suddenly become enemies, the king and Marshal Badoglio fled away and the troops, without specific orders, are in total chaos. The second lieutenant of the Italian royal army Alberto Innocenzi (Aberto Sordi) and his troops hear the news of the Armistice too; therefore they end up under the enemy fire of the Germans. The Lieutenant tries to persuade his troops to wait for new orders but the vast majority of them abandon him. Many desert in order to go home and many run away. Lieutenant Innocenzi, throws his uniform away and together with three soldiers of his former unit embarks in a long and dangerous journey to go home across occupied Italy.

LOCATION Some sequences of the film, namely the one about the river crossing on a ferry, were shot in the area of Polesella.

Scano Boa is a small village in the Po Delta area inhabited by a fishermen-only community. Here settle down a father and his daughter Clara, immediately disliked by the local community that blame them for the missed arrival of sturgeons (main source of income). Clara is raped by the village dandy but she keeps silent. Then one day sturgeons finally arrive and everybody rushes to fish the, including Clara’s father who, unexperienced and left alone, ends up drowning. His daughter delivers a baby just during his dad’s funeral.

LOCATION The film was entirely shot in Scano Boa. 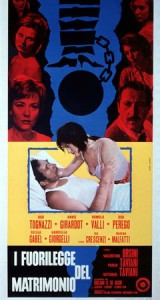 The film, made of five episodes, is based on the 1954 blueprint by Senator Sansone for the approval of the so-called “quick divorce” proposing to dissolve a marriage in extreme cases including, for instance, the disappearance of the spouse, as showed in the film episode shot in Comacchio where a married man, Vasco Timballo, goes back to his home town after a long absence due to the war and detention, and does not find his wife any more. Thinking that she is dead he establishes a new relationship with a young woman. However, the wife is not dead, she has become a nun. He tries then to make his marriage null and void but he will end up in a grotesque and insurmountable situation leading him to a complete failure. In other words he has to remained married to a nun.

LOCATION The fifth episode was fully shot in Comacchio – recognizable through some typical views of the city centre and of the Trepponti – only the sequences set inside the convent where shot inside the former convent of Saint Frances in Bagnacavallo.