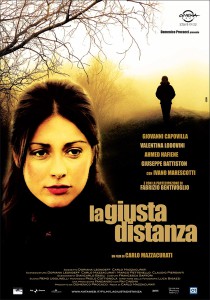 Third work of the so-called “Trilogy of the Po”, La giusta distanza is a social thriller on racist prejudice set in the Polesine area, namely in a fictional village, Concadalbero, where live Hassan, a young Tunisia mechanic, well integrated and highly estimeed for his skills, and Giovanni, 18-year old doing his forst job as correspondant for a local newspaper. When Mara (Valentina Lodovini), a young and attractive teacher, comes there for a temporary replacecement assignment, the paths of the three main characters start to cross first in a climate of restlessness, then of passion and finally of tragedy. Giovanni will have to decide whether to keep the right distance or get involved and start investigating the lives of his fellow townspeople.

LOCATION The film was mostly shot in the southern Polesine area.
In Santa Giulia can still be seen the bridge made of boats featured in the sequence where Franco warns Giovanna about the chinese roundup; Giulia’s house is also not far from there. Hassan’s workshop and Giovanni’s house are located in Bacucco on the Po della Donzella.