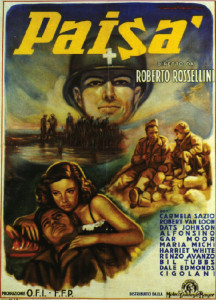 This is the second film of the Anti-fascist fight of Roberto Rossellini and it is considered as a masterpiece of the Italian neorealist wave.
It was mostly shot with non-professionalactors and it is made of six episodes about the ad ance of the allied forces in Italy. From the anglo-american landings in Sicily during the night of July 10th 1943 to the partigiani resistance fights in the North of Italy, during the winter of ’44, few months before the end of the war. The last episode, Porto Tolle, is set in the Po mouth area where some former american prisoners join the hiding partisans and together fight against the Germans who are sailing up the river on ships heavily eauipped with weapons. A bloody clash took place in the marshes of Polesine where the nazi-fascist soldiers also made violent retaliations against partisans and also harmless civilians. This episode opens with the dragic image of the dead body of a partisan carried away by the river stream. Rossellini had witnessed several times the same tragic scene with his own eyes while travelling along the Po river: “I had in my mind those dead bodies floating slowly in the water, holding a writte sign “Partisan”. The river has carried around those corpsed for months. In one day it was easy to spot many of them”.

LOCATION The film was shot along the river banks in the areas of Porto Tolle and of the Sacca di Scardovari.